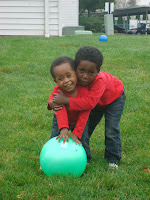 We got some amazing news today, we are thanking God for His faithfulness, and love for His kids. Let me explain.
Last week, we took the boys in for some routine "welcome to your new life" blood work and Doctor visit. Then a few days later, the Doctor called us at 7 pm and told us one of the boys had a serious problem with his blood, and that he has tested positive for a serious problem. We were shocked, because he had been tested in Ethiopia several times, and each time it was negative. We got over our shock, and moved forward, knowing there was nothing that effected how much we loved our kids, and no matter what, we would never trade them for anything.

We got him retested, and they checked to see how much damage this disorder had already done. The answer to the the second question..was none. His body showed no effects. Then today, the Doctor called back and said he had tested negative this time. She was shocked and told us she has no idea how this happened or what was going on.
But you know what, we do! We believe Father stepped in and healed our little boy! We asked if it was possible if they accidentally mixed up the first tests, and we had retested the wrong boy. She said no, she could tell it was the same blood. So the Specialist says we need to re-test in 1 week, and we will, but we know what the result will be!

I did not say which boy it was, or what the problem was. That was on purpose, as it does not matter. Plus, it adds some mystery to the whole blog! We are rejoicing, and once again amazed at His faithfulness, and how He takes care of us more than we could ask of think!
Posted by Ransom Family 4 at 5:07 AM

Wow guys, that is great news!! We are rejoicing with you and praying for continued healing and another negative test result. Praise God!