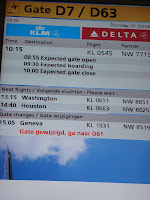 Today was the day we had finally dreamed about. After all this planning and frustration, and excitement we were on our way to Ethiopia! We left Portland very early, so we checked into a hotel at the airport the night before, and we actually got some sleep.

Our flight to Min. and then onto Amsterdam was very uneventful and I actually got quite a bit of rest, something that never happens for me on a plane. We thought that each step of the way, we would get more excited, but I guess the face that we were almost there was not hitting us yet. Finally after about 20 hours in the air, we are almost there. We just had to stop in Sudan for one hour. We did not have to get off the plane, but some people did get off. One thing I realized, is that from the air, Sudan looks like you imagine it does. We had to circle for a while, as the one runway in that airport was closed due to some important person there. It was also filled with UN planes, which was kinda cool. 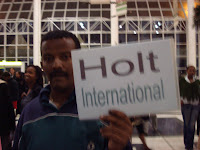 Finally we landed in Addis Ababa, and stepped out into the Africa air. Before we could go meet our group, we had to get our visa and go through customs. We live and work in a very crowded country, and are used to pushing our way through crowds, but this was un-like anything we had done before. The lines to do these things were just a solid mass of humanity. It was so much fun.

Eventually we work our way through everything, and ,meet up with the other 9 families from Holt who are there to pick up their kids as well.

The drive to the hotel was at night, so my fist impression of Africa was hindered. But the one thing that stood out was it felt and looked like China. We found out later there is a reason for that... 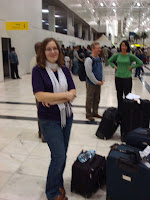 We got to our hotel, unpacked and went to sleep knowing in the moring we would meet our boys!