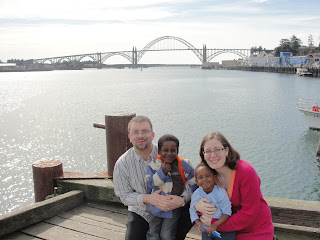 I want to share something that happend this evening. While the story itself is heartbreaking, the thing I learned most is that no matter how well adjusted the boys seem, they are still hiding the scars from the events in their previous life.
Tonight, we got home about 6 pm. Everyone knows that at the time, there is an important question that has to be asked. "Whats for dinner?" Unfortunately for us, this was one of those days where you go to the cupboard, and there is nothing there. I mean nothing. I was able to find some old noodles, from a mac and cheese box, and some beef round steak. I did not know what to do with the beef, so I cooked it in a pan and added some seasoning...it was bad!
To add to the urgency, Tegan was telling us that he was "hungry, hungry, really hungry please" The boys had had a small lunch and no snack, so I know they were hungry.  The hunger issue is one we are sensitive with, just because so much of their life in Ethiopia was spent in hunger.
Well, since the dinner I prepared was not happening, we told Tegan that we did not have any food in the house, and he could have an apple.  Our idea was to hold them off, while we figured out something else. As we told him that, this look of sadness and resignation came over him, as he heard us say, "no food...apple....sorry...." We quickly realized he thought we were telling him that he would not eat tonight....and he accepted that. No complaining, just defeat...
As soon as we realized that, we scooped them up, ran out the door and we to a restaurant.  He told us in the car, that he was scared that he was not going to eat tonight.
That broke our hearts, as our first promise to him was that he would never be hungry again. He knows the difference between hunger between meals, and real hunger; and thought that we had broken our promise. That in America too, he would be hungry. After dinner we went grocery shopping as well, so its all okay now.  But this was on of the first times, where I saw the pain from his old life, impact a part of his new life.
I now that will happen ever so often, but as a parent its so hard to see my children in pain. I am so thankful that they are a part of or family, and that he has us to work through that pain with him!
Posted by Ransom Family 4 at 2:01 PM