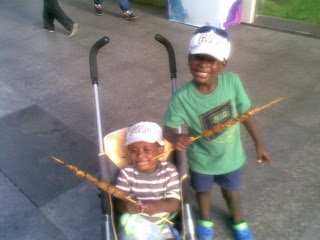 Today was a special day, it marked one year since we passed court, and legally became parents. Now, in adoption there are so many steps, that you could find a million special days. But that, in conjunction with something Renee said yesterday, got me thinking.
Renee mentioned to a foreign friend, that the boys seemed to be adjusting to China better than they did America. I thought about it, then thought some more-I am slower than most people- and finally I had to admit I agreed. But that got me thinking about why. We know that that is an answer to PR's that we and many people have been PR'ing, but there is more to it.
China is more familiar that America was at first. Now they have the same parents, clothes, toys, movies, and foods. When they came to America it was all new. Here, just bits and pieces are new.
But they are adjusting very well. Honestly, they do better with the stares and comments than we do, they are very adventurous, willing to run off and use their broken, okay, very broken Chinese, to meet a new kid on the playground. They have amazing compassion for others, that we did not fully see in America. They want to help every beggar, and feel bad for anyone with problems.
Bringing them to China was something we felt guilty for at first, but now we see it was all part of a plan that is much bigger than ourselves. Do they still have some adjusting to do? Of course, and they always will. But in the meantime, they play with their American toys, and watch their America movies, while eating eggplant and Chinese candy!
They are such amazing boys, and every day I am more and more grateful for the opportunity to call them mine
Posted by Ransom Family 5 at 7:06 PM