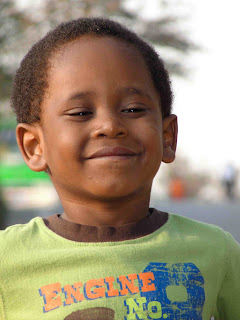 This is the update on Preston.  He is my baby boy. He is our jokester and our clown. He will be an amazing practical joker when he is older. He desperately wants to grow up, and be big like his brother. So everything Tegan does, he has to do. Usually he cant do it, but it is so cute to watch him try, and usually fail! The he cries, and Tegan will come help him. Then they run off to play, and the cycle begins again!
He is the one people run to, and want to play with all the time. We have a hard time with this, as people want to take him out of arms, and don't respond well when we say no. He is still seen as a baby, and that bothers him. He will be 4 in a few months, and does not like it when people forget that!
Right now, his life consists of playing, sleeping, and eating! He will begin kindergarten in a few months, but right now he fights off jealousy when Tegan leaves everyday.
In some ways, it would be fun to have his life. Right now his biggest decision is who to marry! His list changes daily and includes:
Tegan
Mikayla
Sara
Maggie ( the dog)
Mommy
Daddy
Grandma
Grandpa
America friends
Chinese friends
He will be setting marriage records I think.
He is also teaching us patience. He can not sit still, and is constantly touching something. That is hard for us, as Tegan is the exact opposite. But its okay, he is who is! We also see reflections of Renee and I in him as well. In the way he walks, in his actions, and speech.
He loves to ride his bike, and play basketball. He wants to take the training wheels off, but he forgets to pedal sometimes when he sees something interesting, so that cant happen yet.
He too loves to eat, especially candy and pastries. He loves eggplant as well, though he is not nearly as picky as his brother. In fact, if Tegan is not sure about something, he will ask Preston to try it first! In short, he is an amazing boy. He is  exactly who we needed, and we love him more every day!

I know I always say this, but it's true. I am so happy for yall. That Father placed Such Incredible little boys in your lives, and that He placed you exactly where you need to be. I am blessed to say I can call you friends. Love yall.
Cassandra Jane.