Anyone who has spent any time at all in China knows that the philosophy of raising children truly follows the old adage, "It takes a village to raise a child."  The most common sight in our complex is to see all the 奶奶 （nainais--grandmas) circled together with all the 2 and under kids in the middle.  The grandmas topic of discussion is most about the needs of the children in the complex and how they can be met better. 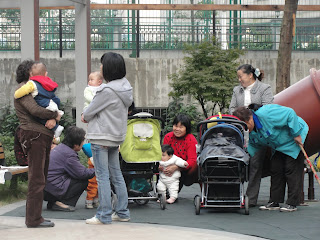 SO…when I venture out with the boys on a school day, their concern turns to my children.  The most common comments I get are, "They need another layer of clothing,"  and "They need to be in school" .  Quite often, the comments are a little more confrontational as if it is the sole mission of the grandma group to make sure the foreign kids are taken care of.  "WHY AREN'T they in school?" My usual response is that I teach them at home, which elicits a whole stream of questioning such as, "How can a mother be a good teacher?"  So I go through the schpeel (sp?) about how I used to be a teacher, and we want them to be taught according to the American philosophies, etc etc.  The conversation is always concluded with me feeling defeated and them unsatisfied.

Just recently, I was engaged in a conversation in which I could tell was headed in the same direction, so I started right into the speech.  This time, I began with, "Well, I'm a teacher," and that was enough to end the conversation.  I tried this response the next few times and that was all it took.  The grandmas were concerned about MY qualifications as a teacher.  They weren't questioning my parenting, but my ability to teach.  So to all my friends in China who homeschool, try that response.  It's saving me lots of frustration and calms the neighborhood grandmas all at the same time!