Though it's Fall and we are learning all about deciduous trees and how they loose their leaves all at once, there will also be a hint of Spring in this house.  We are currently doing a science unit on plants, so we  picked up a flower-growing kit from the grocery store.  We've seen these many times and have never looked very closely, but as we were bringing this lovely package home, we noticed it is labeled as 太太花园（Wife's Garden).  Even though it's a science project, I guess it's never too early for a boy to learn that his job is to help the wife in whatever way possible.  The saying does go something like, "Everything you need to know, you learn in Kindergarten." 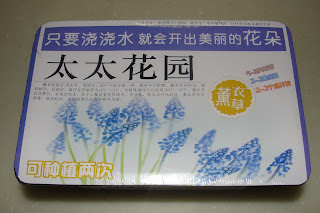 And they are BLUE BONNETS...After all, these boys must be educated about the great country state of Texas!

Most of my blog posts are about the boys and how fantastic they are doing--probably to the point of annoyance for our "followers", but I'm so stinkin' proud of them!  They are growing up into such fine little boys.  Every day, I'm amazed by how much they are learning about the world around them, about loving people, about God, about...let's just say it...everything!  So here I go, bragging just a bit about each of them.

A while back, we tried to start Preston with reading a few words, and he loved it, but his attention span was just not ready to really work on it.  This week, we picked it up again and he is learning so quickly.  He is very proud of himself and claims that his favorite letter is "rrrr, rrrr, ring," otherwise known as "R".  On the first try, he was able to read all of the /-at/ words.  Just look at how happy he is. I'm so excited that we'll have 2 little readers in no time at all! 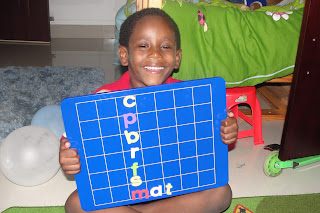 I was blown away last week by a story that Tegan wrote (dictated to me).  We read several versions of Goldilocks, and then I had him write his own rendition changing up the characters and the ending.  For you reading pleasure, here is... 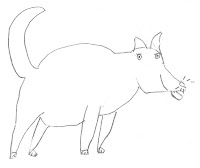 Once upon a time, there were three pigs living in a big house. There was Papa Pig, Mama Pig, and Baby Pig. They were afraid to leave their house because they thought that people or wolves might want to eat them for dinner.

One day, they got brave and decided that they would go outside to play. But before they left, they made a big meal of corn and pig slop because they knew they'd be hungry after playing. They left it on the table and went outside. When they were scared, they hid so that no one could see them, and while they were playing a wolf came.

He went inside the house and saw lots of pictures of pigs and that made him hungry, so he waited for the pigs to come home. The pigs played and played and played, and the wolf got hungrier and hungrier and hungrier. He couldn't wait anymore! He sniffed around until he found the food that the pigs left on the table. The wolf didn't like corn, so he tried the pig slop. He tried the slop in Papa Pig's bowl, but it burned his mouth. He tried the slop in Mama Pig's bowl, but it froze his mouth. Finally, he tried the slop in Baby Pig's bowl, and it was just right, so he ate it all up.
After his meal, he was so full and thought that his tummy would blow up, so he tried to go potty. He sat on Papa Pig's potty, but it was too big and he fell in. Then he tried Mama Pig's potty, but it smelled like flowers. Finally, he tried Baby Pig's potty and it was just right.

The wolf finished up and was so tired of waiting for the pigs to come back, so he decided to take a nap. Each pig had it's own bed and he tried Papa Pig's first, but it was too hard. Then he tried Mama Pig's bed, but it was too fluffy. Finally, he tried Baby Pig's bed, but he didn't know that Baby Pig's bed was special. Mama Pig and Papa Pig had made a special trap on Baby Pig's Bed. It wouldn't catch Baby Pig, but it would catch people and wolves and anything else that likes to eat pigs. So when the wolf lay down on Baby Pig's bed, the trap caught him and he yelled, “OUCH! OUCH! OUCH!” because his tail was caught.

The pigs heard the noise and ran home as fast as they could. When they came in the house, the first thing they saw was the empty bowl at Baby Pig's place. Baby Pig cried, “Oh, no! I'm very hungry.” Then Baby Pig had to go potty. When he sat down he noticed that all the toilet paper was gone and he cried some more. “Oh, no! Now I'll have to go in my pants.”

Then it was time for a nap, so all the pigs went upstairs. Baby pig went in first and screamed because he saw a wolf. “Mama, Mama! There's a wolf in my bed.” The wolf was so scared to see Papa Pig and Mama Pig that he tried to run. He forgot that his tail was trapped, so when he ran, it fell off. He ran away, and after that, he showed his tail to all the other wolves and to all the people. He told them to never, ever mess with the pigs
The pigs were never too scared to go out to play again, and they lived happily ever after!