Renee and I were looking back at the blog posts from when the boys came home, and we realized we have not done them for Alyia. So they are late..but here they are.

After MONTHS of waiting, and a false start or two, we had finally been given permission to go to pick up our daughter. We planned to go from China to Africa to America to China, so we closed our house, and packed as light as we could. We knew we would be buying ALOT of stuff in America, so we managed to fit everything in 3 suitcases! 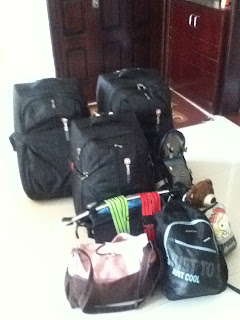 We took the high speed bullet train from our home in Changsha, to the city of Guangzhou. That city has MANY Africans and had direct flight to Addis Ababa, which we were excited about. We got to the train station in Guangzhou, then rode the subway for an hour to get to the airport. We actually met another African family on the subway, and the girls in that family fawned over our handsome boys! We knew Father was taking care of us, as the second we got to the ET air counter, they opened and we checked in with no problem and very quickly. 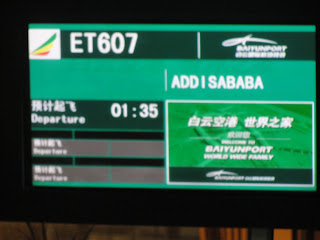 We got all checked in, and then waited for a long time. Finally, about 1:30 am we were bussed out to the plane, we boarded and were on our way! 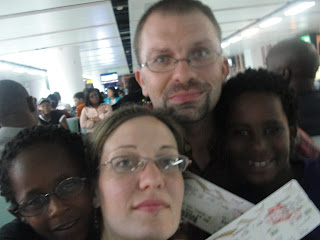 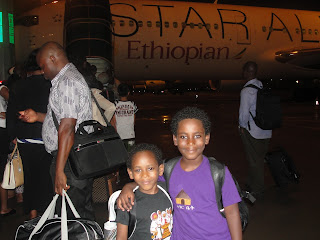 We arrived in Ethiopia about 7 am on a Sunday morning, and after going to our hotel, getting some breakfast, and changing our clothes we were off to get our daughter. We had the driver take this picture of us, our last one as a family of 4. 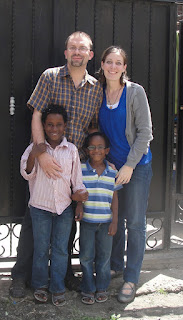 The boys were very excited to FINALLY meet their sister, and they were so proud of her as soon as they saw her. She was not quite as happy to see us though. She started screaming (we would eventually learn this was her scared cry) and the Nanny quickly kissed her goodbye, and we left. 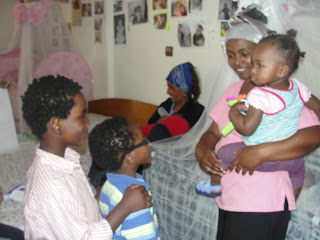 Outside the gate, we posed for our first picture as a family of 5. As you can see, she is not all that happy, but she recovers well and actually took a nap as I was holding her. 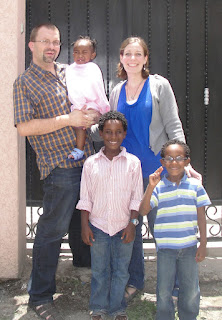 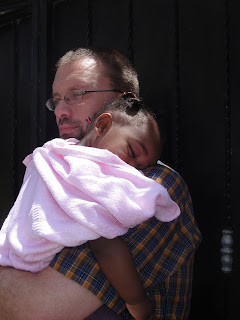 After getting back to the hotel, we changer her clothes, and gave her the stuffed bear that we had made for her, (her brothers were also given stuffed bears when they got to go to the hotel with us when they were adopted) she stopped her crying and began her attachment to us. All in all, it was a good first day! 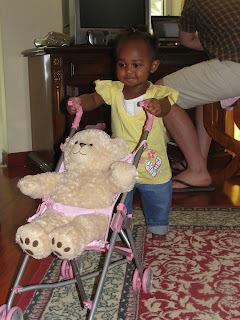