Double happiness, double joy...in China, it's the way a marriage is described, thus the character you see above.

Is this starting to sound like a commercial for Doublemint Gum? "Double your pleasure, double your fun, With Doublemint, Doublemint, chewing gum!"  But I digress.

This past weekend, we were privileged to attend the wedding of a good friend, our Chinese sign language teacher.  We have known her for nearly 3 years and rarely did we meet without her mentioning her desire to get married.  She's 35.  Normally, if a woman reaches her 30th birthday without being married, it is assumed that there is something wrong with her.  This friend is different though.  There is absolutely nothing wrong with her.  In fact, she has her set of values and has stuck to them, waiting for a man who shares those same values.

Around September, she began to talk about "this boy" she though was cute and she "kind of liked him."  She was quite giddy about it all. By October, she mentioned that they had decided to date.  Then she very quickly began talking about marriage.  Again, this is completely out of the cultural norm.  Generally a Chinese couple dates for a year or so before even mentioning each other to their families.  Then it's another year or two before marriage is even mentioned.  To go from dating to marriage in less than six months is virtually unheard of.

We met the "boy" in passing one time, but we never had a chance to get to know him. Still, we had many talks with our friend, and it was obvious that this union was meant to be.  That became even more obvious at their wedding.

Right from the get-go, love was beaming between the two love birds.  But even more so, we saw the joy in their eyes.  It's a joy that only comes from above.  It's a joy that can't be taken away and is meant to be shared.  And share, they did!  No doubt, many people walked away asking why this couple was full of such joy!

Several things stood out to us as being different from what we normally see at a Chinese wedding:
As you can see from the pictures below, this wedding was truly filled with a double portion of joy.

And maybe next time I see my friend, I'll give her a pack of Doublemint gum! 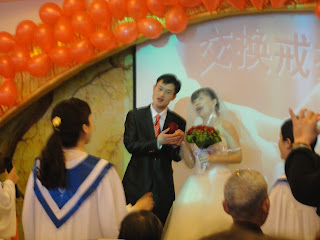 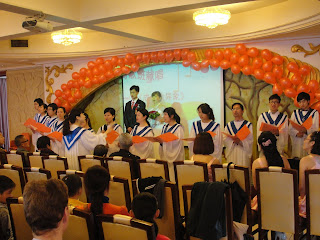 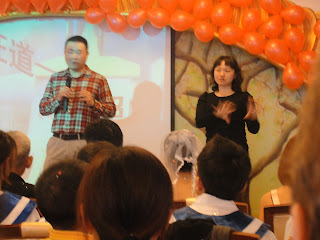 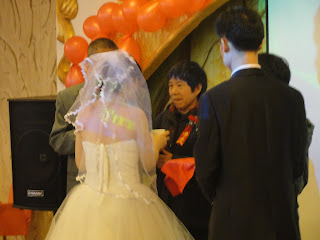 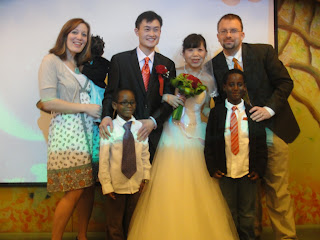 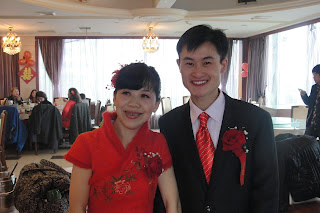