Boys are stinky!  It's a fact that can't be changed, but over the past two weeks that stink got just a little bit sweeter for this Mama.

Living in another country is just hard for kids sometimes.  TCKs* have it rough, and we know it.  That's not to say that there aren't some pretty great perks to living in a foreign land and experiencing everything that goes along with it!  (There's a great post by another parent in Djibouti entitled 15 Things I want to Tell My Third Culture Kids that really resonates with us)

The hardest thing for us to watch our boys struggle with is making friends. For our first 2 years here with kids, just enrolling them in Tae Kwon Do and encouraging them to play with other kids outside was enough.  Lately though, we've been noticing that the superficial friendships at TKD and with the neighborhood kids just isn't cutting it anymore.  They have a hunger for some deeper friendships.  Because they don't go to Chinese school, because they are homeschooled, because their Chinese is not perfect, because kids here are in school till 6pm and have hours and hours of homework on top of it, and because they are just plain different, making friends is difficult for our boys.  Josh and I have gone through the whole scope of discussions (which I won't get into) about how best to deal with this.  Social life is so important for children.  It's how they learn to function in the real world.  We've cried, we've discussed, and we've PR'ed.  Basically, we came to the conclusion that Father is the one who will have to provide such friends.  So we continued to PR.

We decided that we needed to loosen the reigns a little for both boys to give them more opportunities for friends.  That meant allowing them to be outside when the other kids were out even though it didn't follow our "schedule for a structured day".  It meant giving their friends an open invitation to come to our house whenever they have free time (Chinese, especially kids, don't plan in advance so arranging a play date doesn't work).  It meant becoming much more flexible and much more tolerant of spontaneity....AAAAAHHHHH!  I like structure, I like schedules, and I like predictability--it's what I thrive on.  But my boys needed me--needed us--to let go of that for their sakes, so we did.

About 2 weeks ago, Tegan and Preston met two boys at the basketball court of our complex.  Over the next few days, the boys met up each evening to play together, and every few days, another boy joined the group.  There are now six of them.   The other kids have a 2 hour lunch break each day.  Usually kids rush home to eat then either study or take a nap before returning to school.  These boys are different.  They don't take naps and their parents aren't concerned with them studying during this break.  As a result, they all get together to play just as soon as they can eat lunch.  Inevitably, there is a knock at our door each day between 12:30 and 1:00 asking if 海威 (Tegan) and 海博 (Preston) can go out to play.  These same boys show up again each night around 7:00.  They usually play soccer and basketball, but they also enjoy hanging out at our house.  Apparently, Alyia is the little sister none of them have, and they love her to bits.  Tegan and Preston don't mind getting her to show off all her tricks either.

These boys are good, responsible kids!  They are not typical of most boys their age.  I'm so proud of the friends that Tegan and Preston have chosen.  I don't worry about what kind of trouble they are getting into, though I do still worry about skinned up knees and broken arms ;)


I just snuck outside to see what they were up to and this is what I found...
an innocent game that was a combination of tag and hide-and-seek. 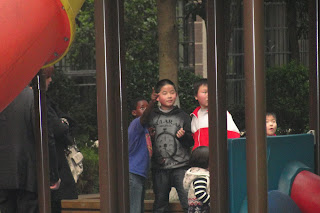 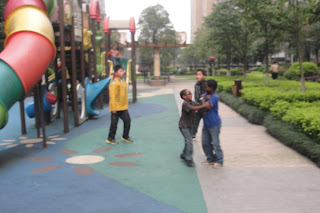 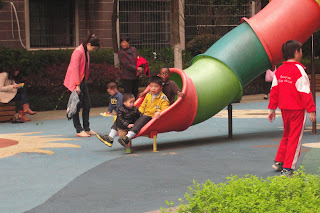 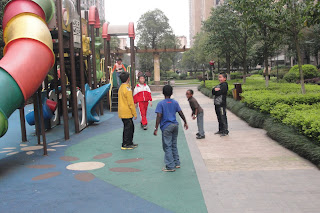 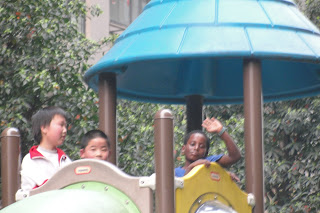 The amount of time they spend together is quite possibly a little excessive and we'll probably end up having to set some boundaries, but for now we're planning a late movie night to follow one of their soccer games.  I'll be armed with lots of food, boy humor, and air freshener.

In the desperation of our PRs of late, we've been given a solution.  Four great friends for Tegan and Preston practically showed up at our doorstep.  I'm enjoying having a stinky house because I know that the needs of my boys are being met in a way I ever expected.  Father is so good to our kiddos!  He knows their needs and is always sure to provide!

*Third Culture Kids--kids who have melded 2 or more cultures together to form a third unique culture
Posted by Ransom Family 5 at 6:33 PM

New casinos will do plenty of 코인카지노 promotions to attract clients. While they could offer huge winnings and favorable odds, choosing a on line casino with a greater reputation and more years in the field is healthier. They’ll be safer and offer more games than model new} on line casino.